A glimpse at my Sunday, August 7th

Autumn, 31, from Alamosa, CO.  This day is day 9 of a 9-day backpacking trip where my husband and I were traveling along the Continental Divide in Colorado, within the Weminuche and San Juan Wilderness areas.  We had planned on being out for 12 days, but four days straight of rain and altitude sickness (we spent a lot of time above 11,000 feet) convinced us to exit early.  The day prior to this we had hiked down from a pass that was at 11.400 feet to some natural hot springs ("Rainbow Hot Springs") at 9,500 feet (we're used to about 7,500 feet so this was much closer to our norm).  If you're interested in seeing the entire trip you can go to my journal.  My previous posts in this community are here.

We woke to clear skies (seriously, completely blue skies without a single cloud) at about 7:30.  The sun hadn't filled the canyon we were in yet but it was moving in quickly.  Our first priority was to get water from the creek before leaving.  The night before the creek had been so flooded that the water was brown.  Fortunantely by morning it was back to clear.  We needed to let our boots dry out some in the sun before we could start hiking - both were still soaking wet, but a few hours in bright sun would dry them quite a bit.

Our camp early in the morning.  We have everything laid or or hanging so that it can dry. 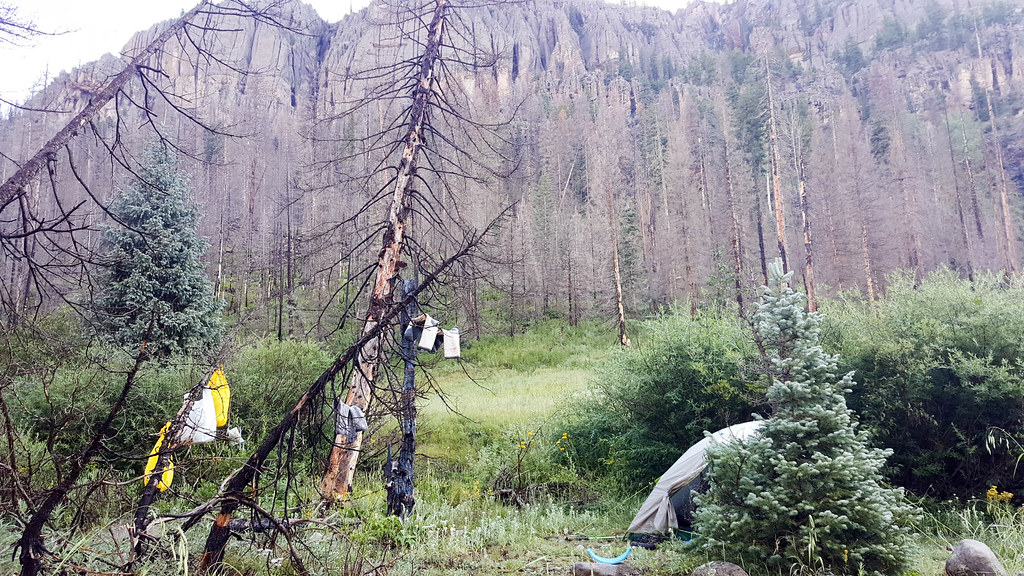 A panorama as the sun was just creeping into the Canyon

Our boots drying on the fire ring 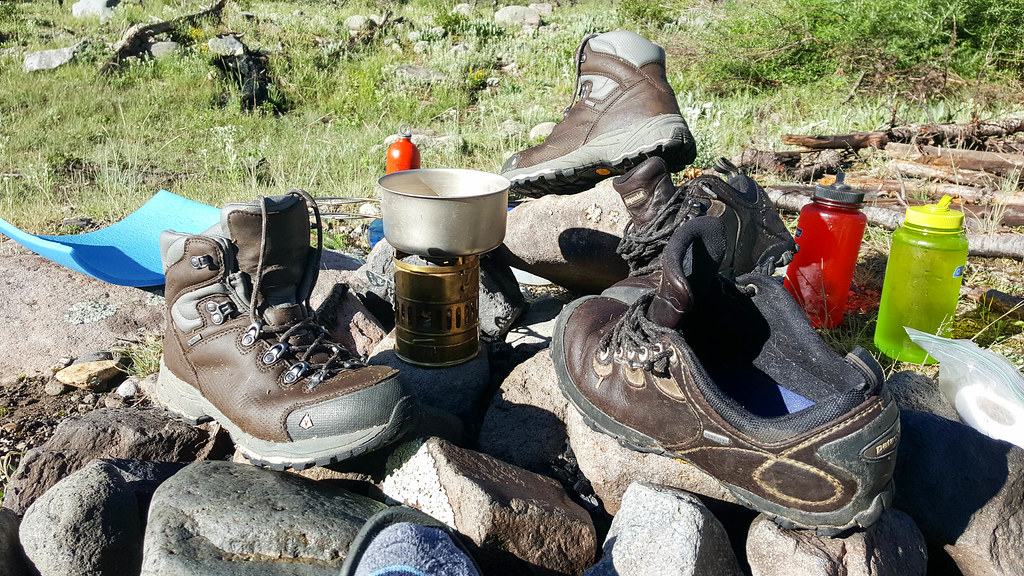 By our camp just before we throw on our packs.  It's bright and very warm already. 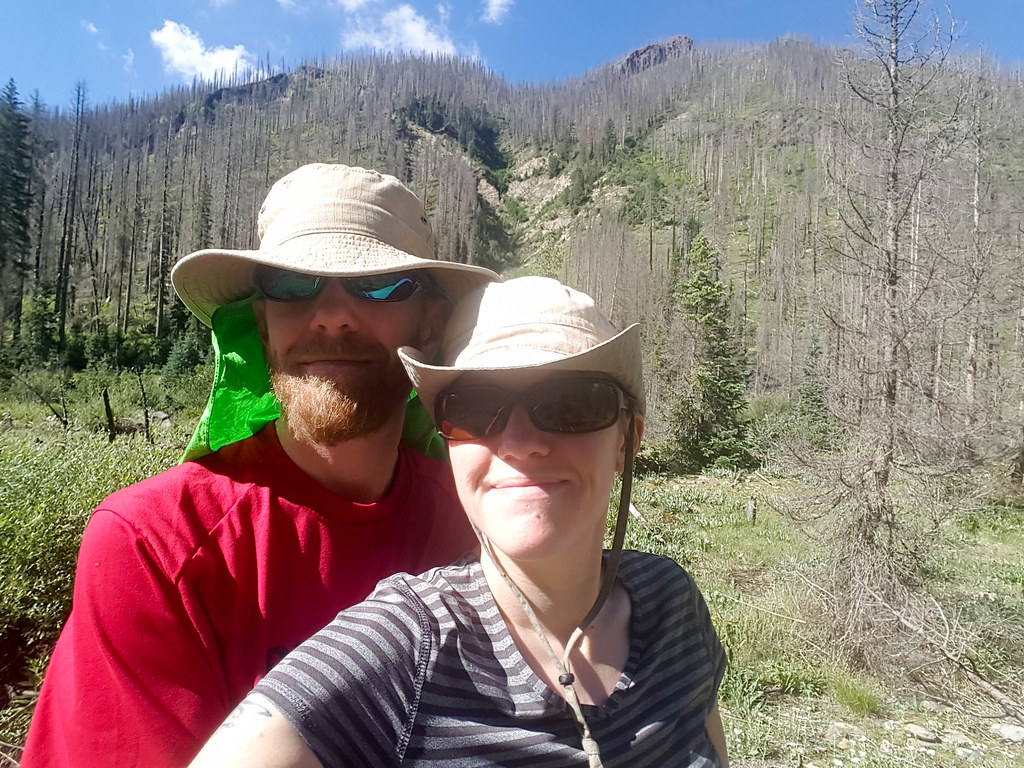 The trail down was breathtaking.  Lush, went deep into the forest and followed the creek (which turned into a river, or rather fed one), many water crossings although the big ones had a bridge or some support.  We were feeling pretty good this day - our packs had lightened up and weren't hurting too much, the dogs were in good spirits and we were full of energy, excited to get home.  This was the picturesque fairy-tale hike that we wanted.  We had seen a few people around the hot springs the day before, but today we started seeing a lot of people on the trail - that was somewhat weird.

Kevin in a field of flowers that is the trail between our camp and the springs. 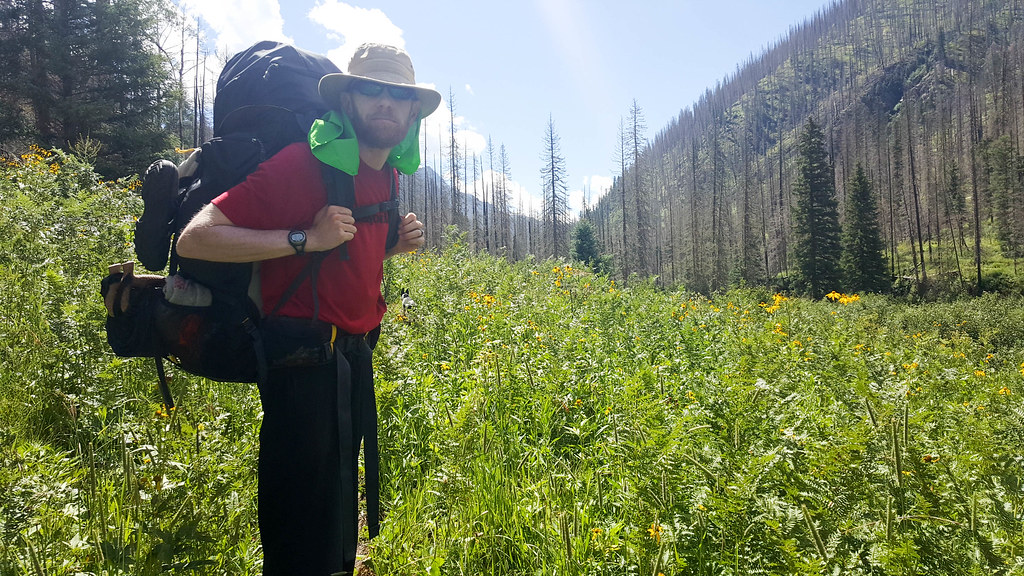 We stopped by the hot springs again on the way out.  Here is the first pool, the one we sat in. 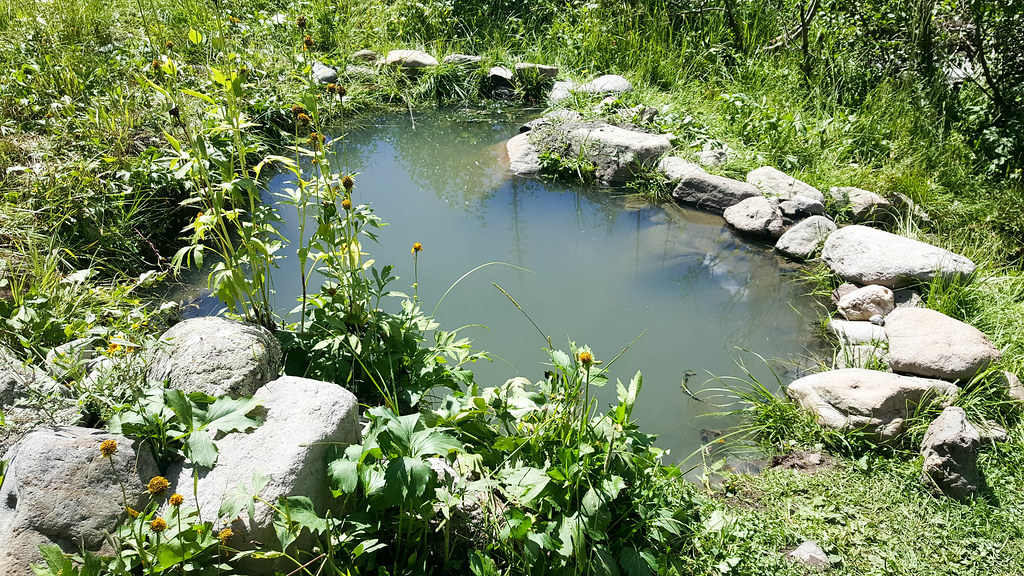 Standing in front of the second pool, and you can see the third across the river.  It isn't flooded today, but the river would be tough to cross. 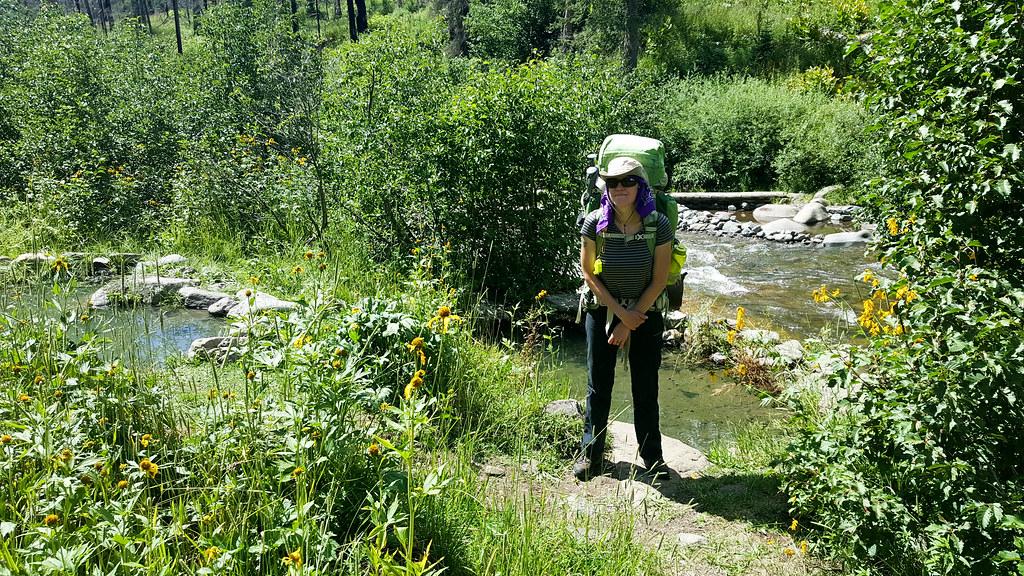 Standing above the first one.  We're so happy and taking a lot of pictures. 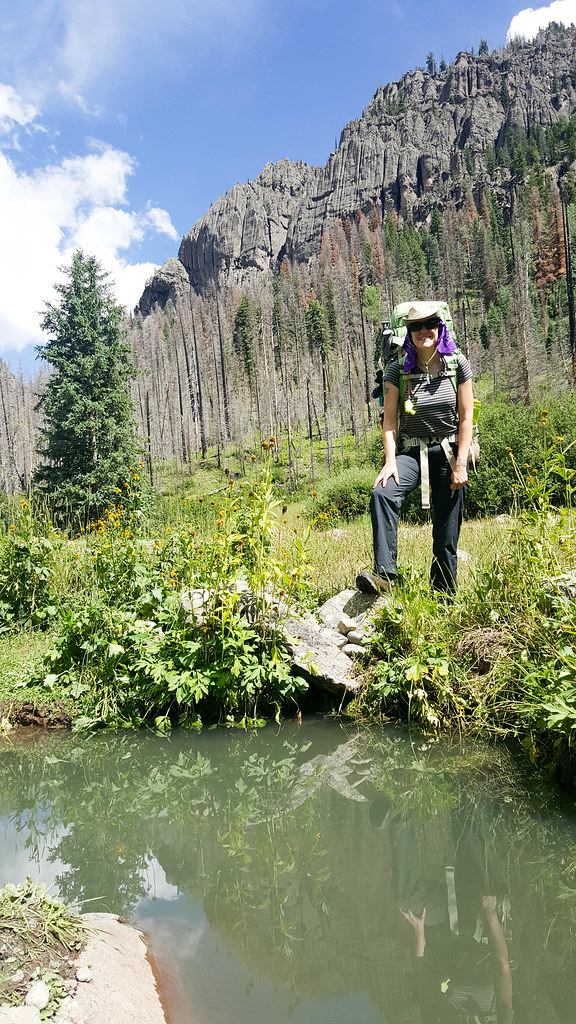 We start hiking, and try to move at a quick pace.  We encounter three bridges over what has become a river now.  Even until normal circumstances it would be hard or impossible to cross without a bridge. 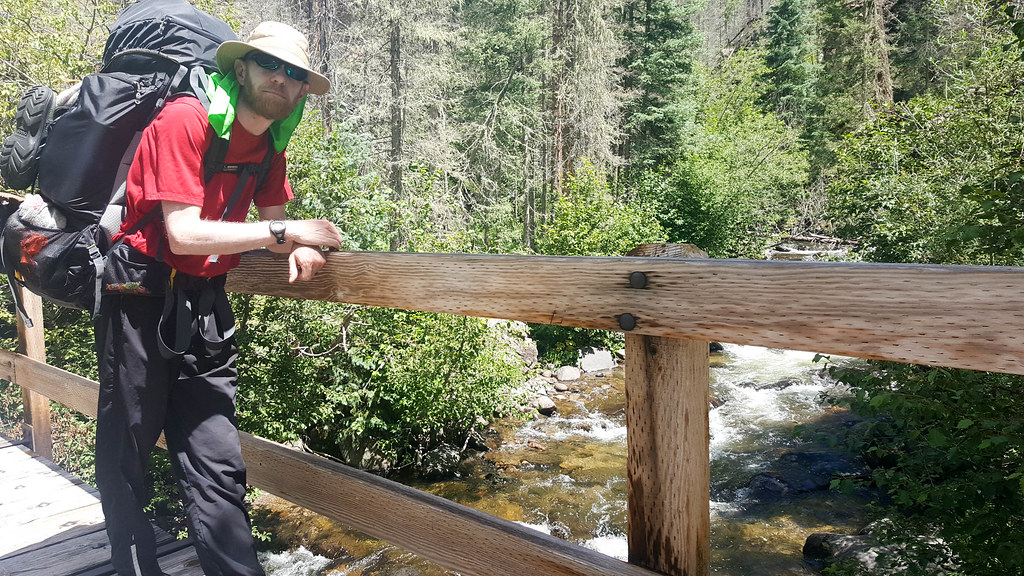 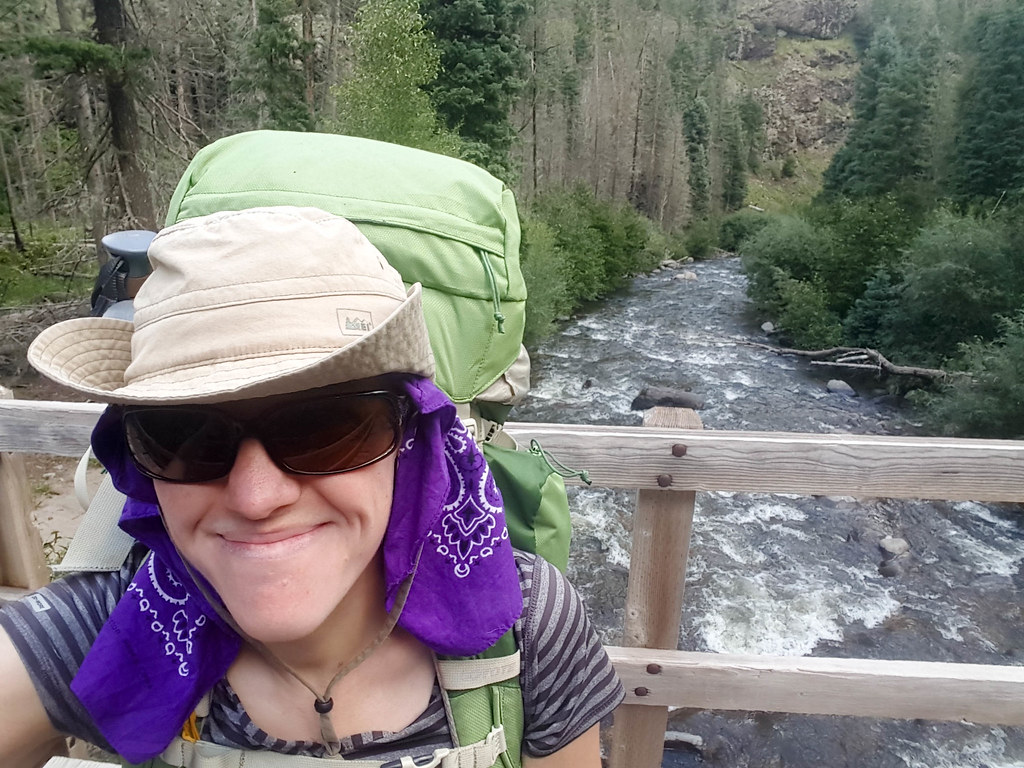 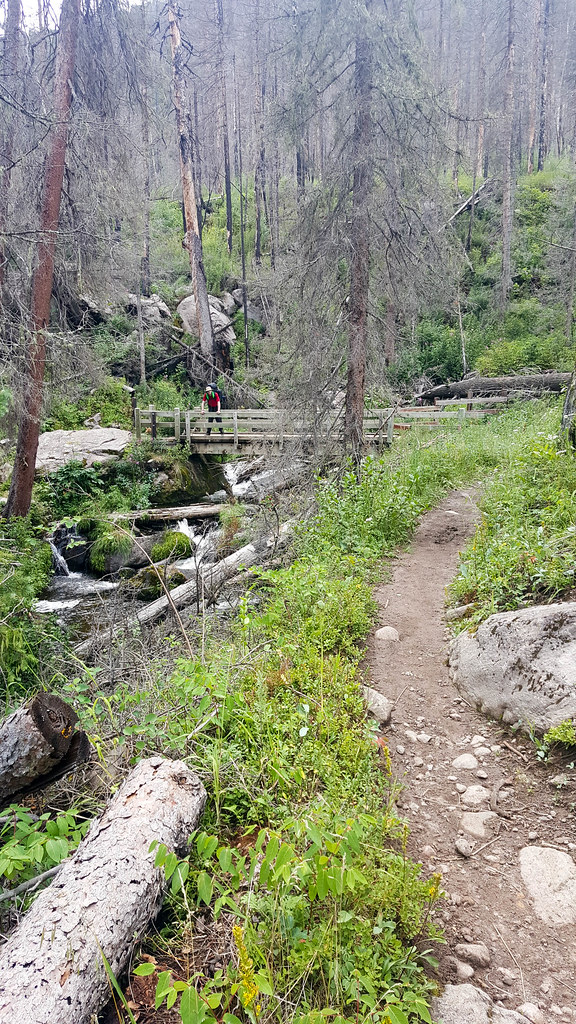 And soon we are officially out of the wilderness and into the National Forest. 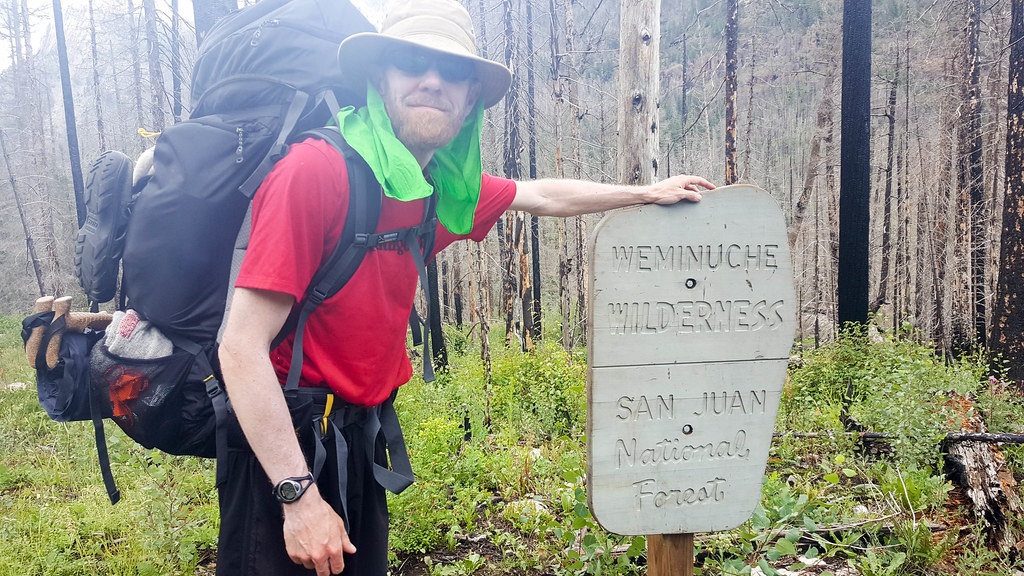 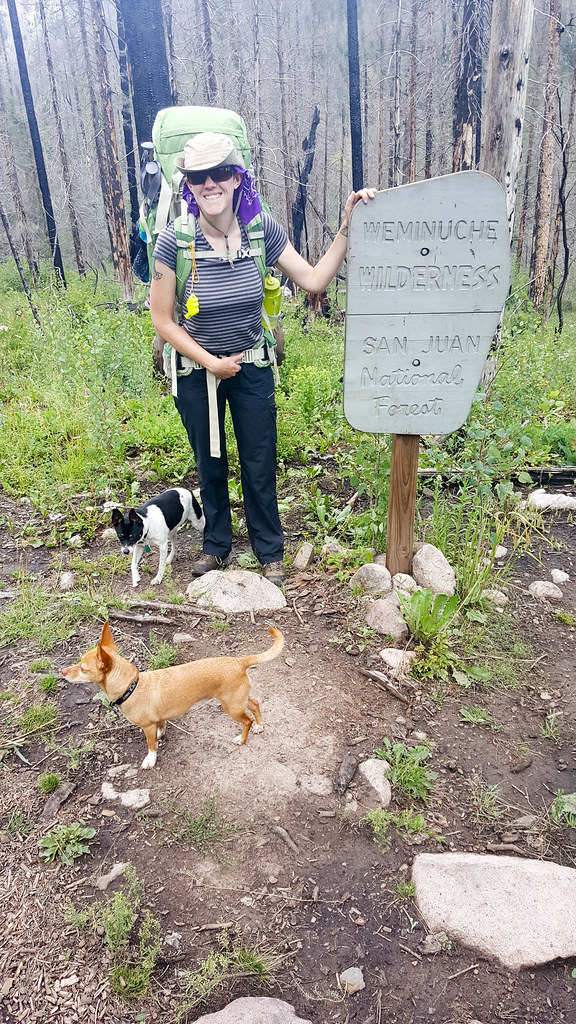 The trail ends soon after that, and we begin searching for a temporary "camp" for me and the dogs.  We found one, I set up the tent, Kevin dropped some of his heavier gear (he still wanted his pack so it's obvious that he's a backpacking and not a vagrant - that would aid in him finding a ride) and he headed off at about 3:00pm.

It would take him just under 6 hours to walk back to the highway, up to a tourist attracton off the highway, find a ride, travel back home (1.5 hours away) and return with the car.  During this time I just read.  Again, very grateful that I had brought my Kindle.  I believe I finished 6 books during our trip.

The weather continued to be nice and I enjoyed laying beneath the trees, protected from bugs and just enjoy the afternoon. 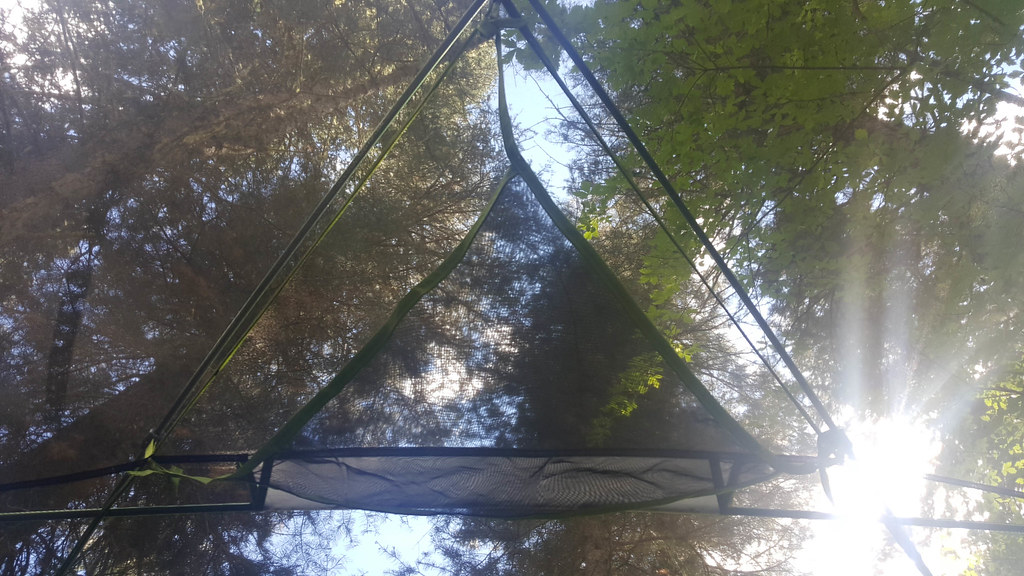 Happy to be done, happy for the sun. 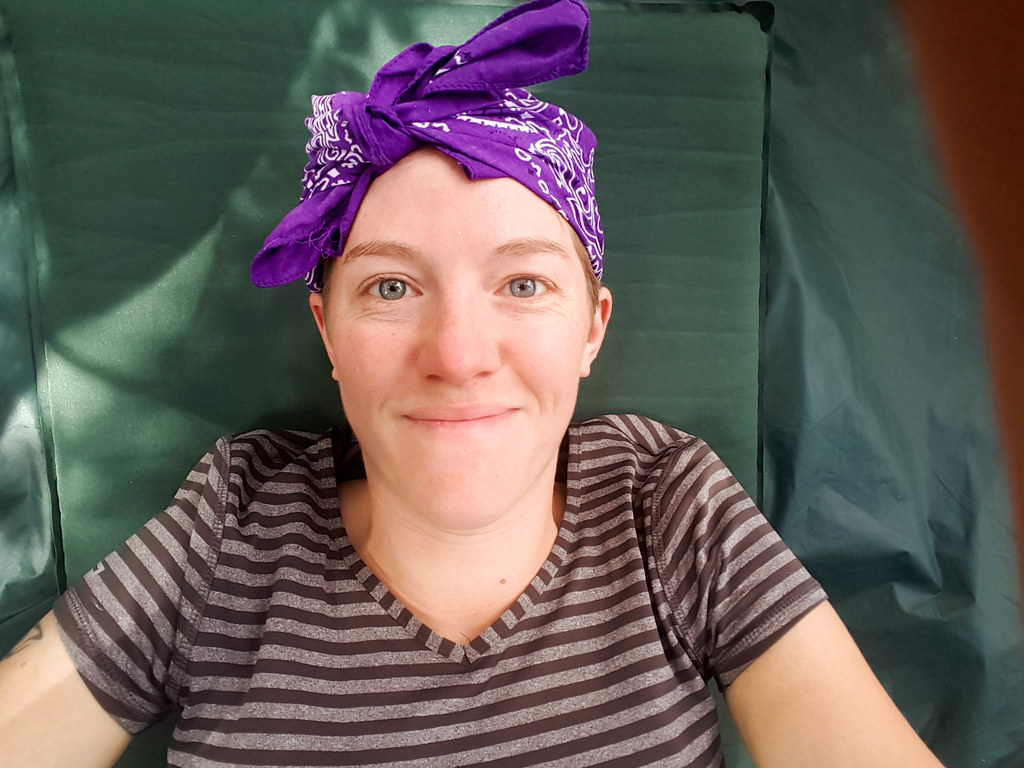 When Kevin returned just before 9:00pm we loaded our things and I devored half of a bag of tortilla chips he had grabbed.  My appetite had returned upon dropping to a lower elevation.  :)

Being in a car, out of the elements and traveling at 50-65mph was surreal.  Seeing and interacting with other people was surreal.  Knowing that we would soon be home to running water, electricity and a bed was very surreal.  All in all, this was a good trip - a good vacation.

Note: You'll notice that there's no food consumption in this post at all...that's because altitude sickness left us with zero appetite and so we literally were not eating, just drinking as much water as we could and popping the occasional jolly ranchers.  I seriously think jolly ranchers were the primary source of my calorie-intake during this trip. :)